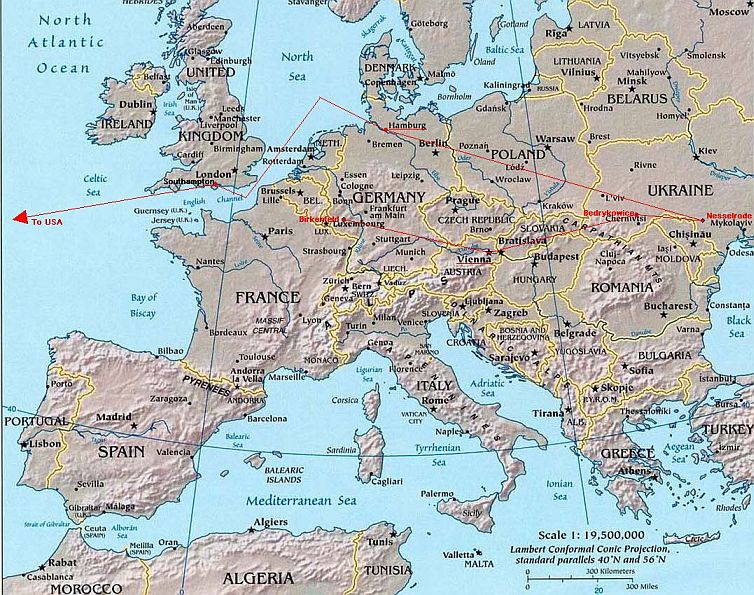 My GAUER ancestors came from various hamlets (Wirschweiler, Dienstweiler, Eborn, etc) in the District of Birkenfeld, Grand Duchy of Oldenburg, Germany. They lived in this area for at least 150 years but at last the shortage of land, war and other pressures caused them to leave the homeland. Here is a map of Birkenfeld district in 1971 (Various villages where my ancestors were born are underlined in red).

On Sept 29, 1784 seven families of settlers including a Franz Heinrich GAUER and Franz Nickel KUNZ made a private arrangement with the Polish Countess Therese Potoka to settle on her lands in a town called Bedrykowce in the Austro-Hungarian Empire province of Galicia. Franz brought along a "family" of "6 persons" including his wife, two sons, a daughter, his brother and his nephew Johann Jacob Gauer who is my direct ancestor. As part of the deal Franz got 23 acres of land and he was required to work on the Countess' crops at harvest times. Bedrykowce is now in Ukraine and spelt Bedrikivci. It is found in the district of Zaleszczyki in Galicia on the Dniester River less than a mile NW of the town of Zaleszczyki. You can see Zaleszczyki on this 1882 map of Galicia (Bottom right corner, north of Czernowitz) (map courtesy of FEEFHS, 238KB).

Bedrykowce is underlined in red in the top right corner of this map: 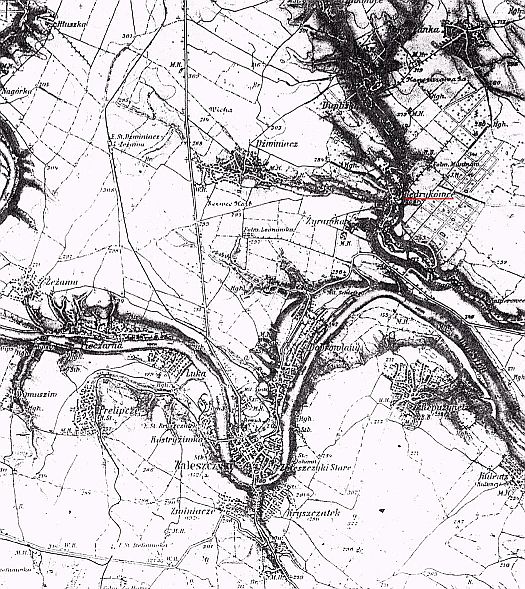 Military Map of the Austro-Hungarian Empire around Bedrykowce(from LDS fiche #6000249) (to enlarge this map click on the image above).
The actual township of Bedrykowce is located just to the left of the "B" of "Bedrykowce" on this map. 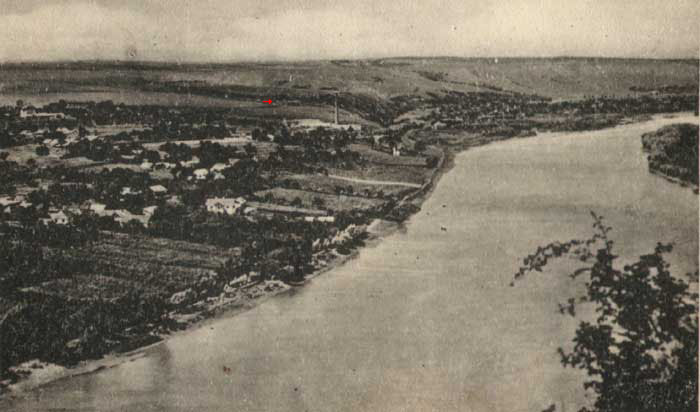 The only known photo I have of the area around Bedrykowce (taken in the 1950s).
Its location is marked with a small red arrow and Dobrowlany can be seen in the left foreground. Out of sight to the left is Zaleszczyki.

Johann Jacob married Maria Dorothea KUNZ (the daughter of the Franz Nickel KUNZ who traveled with Franz GAUER to Galicia). Jacob & Maria's descendants lived in Bedrykowce for 75 years but the problem of large families on limited land and friction between the settlers and their Polish landlady resulted in the grandson of Johann Jacob, Franz GAUER, emigrating with his wife Maria Elisabetha (nee HERZ/HERTZ/HERTY) and 2 year old son Rudolph from Bedrykowce to the town of Birsula (known as Kotovsk after 1935) in the Kherson District of South Russia. 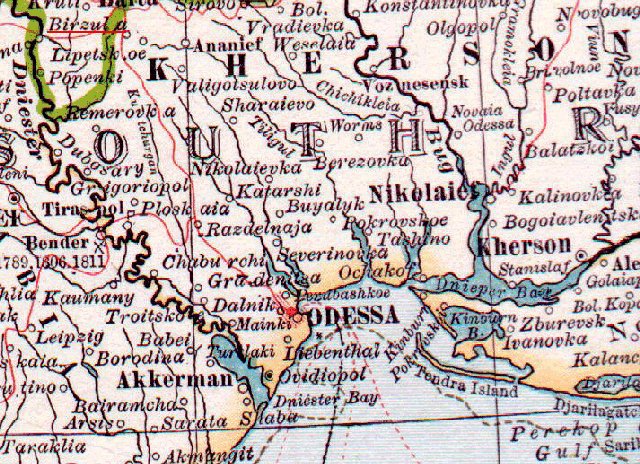 The Kherson district in 1897. "Birzula" is underlined in red in the top left corner of this image and Odessa on the Black Sea is seen 160km south of Birsula at he bottom center of his map.

There was a large number of mostly agricultural German colonies in the Kherson district in the 1800s however Birsula was a Russian town and a rail center so settling in Birsula was unusual for Germans.

In 1880 Rudolph was confirmed in the Lutheran church in the town of Rosenfeld which is 35 km south of Birsula (just west of "Katarshi" in the center of this map). I speculate he was that far from home apprenticing at his trade (stonemason) which he later used in Canada.

Two years later in 1882 Rudolph's mother Elizabeth suffered a few very traumatic months as on Feb 10 her husband Franz died in Neu-Kassel, Kherson district and was buried in Sofiental, Kherson district. Then, just 11 weeks later on Apr 27th, her 6 year old son who was Franz's namesake died. Finally, 4 days after the death of her son Franz, another son, Jacob, was born. Today it's hard to imagine how she dealt with these events but in those days it was a common for children and adults to die young.

In 1886 Rudolph married Anna Maria SCHMALENBERG in the Evangelical Lutheran Prayerhouse in Nesselrode which now part of the southern suburbs of the city of Kotovsk, Ukraine and is known as Kujalnik. The Nesselrode prayer house was part of the Reformed Evangelical Lutheran parish of Hoffnungstal until its disappearance some time around the time of the Russian Revolution. Two sons, Henry and Jacob (my grandfather), were born in 1887 and 1888 respectively in Nesselrode. Nothing but a few German built houses still stand in Kotovsk(Birsula) and Kuljalnik(Nesselrode). The German school with 52 students in 1909, prayer house, graveyard and 386 inhabitants in 1914 all were obliterated. In fact when a visitor from the USA enquired in 1997 of the Kujalnik local authorities about Germans he was told no Germans had ever lived in the area!

In April 1890 Rudolph, his wife Anna, his sons Henry & Jacob, his mother Elisabeth, his brother Jacob and sisters Julia and Mathilde emigrated from Birsula/Nesselrode to North America in response to an increasingly heavy handed Russian empire. Germans who didn't emigrate were either exiled to Siberia or exterminated over the course of two world wars.

One sister of Rudolph, Emilie Gauer, born 1868, did not travel with the family to North America. Her fate was unknown until contact with a Schmalenberg cousin got me looking at family photo albums again and I found "Minnie" Schmalenberg identified as "Father's Sister" (a sister of Rudolph). She married a brother of Anna, Heinrich Schmalenberg, and is included in my 1895 Gauer family portrait now properly identified as the wife of Heinrich, not his sister!

The family took a train from Birsula to Hamburg in Germany and then embarked in steerage on the Hamburg America steamship "Augusta Victoria" for a 9 day trip across the Atlantic.


The Augusta Victoria around the time of their immigration

On Apr 26, 1890 they arrived in New York City and stepped off a tender at the Barge office(circled in red below) in Battery park. 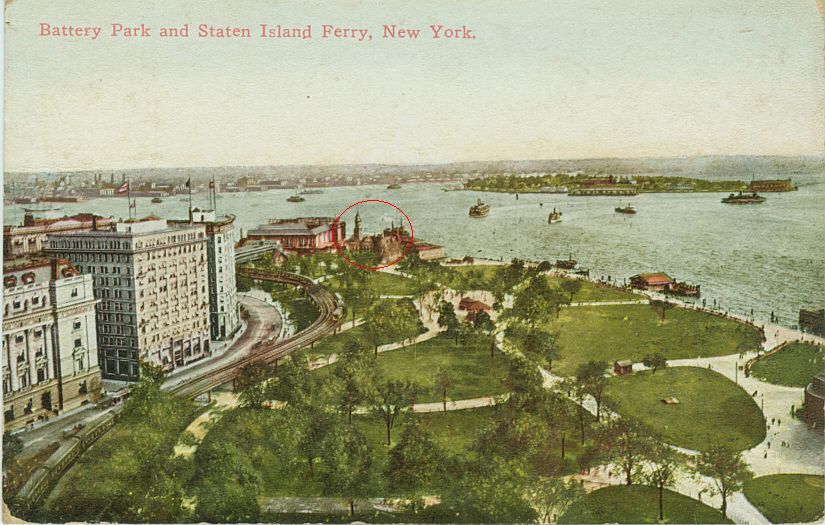 They missed using the Castle Garden Immigration office (the edge of which is just visible at the extreme right of the above image) as it closed 8 days before they arrived. For more information and pictures of immigration to New York see Maggie Blanck's Emigration/Immigration page at this link.

The family then proceeded by train to Winnipeg. In Winnipeg family lore has it that Rudolph built a home at 68 Lusted Ave for his family which still stands where my family lived for many years beside the Red River. 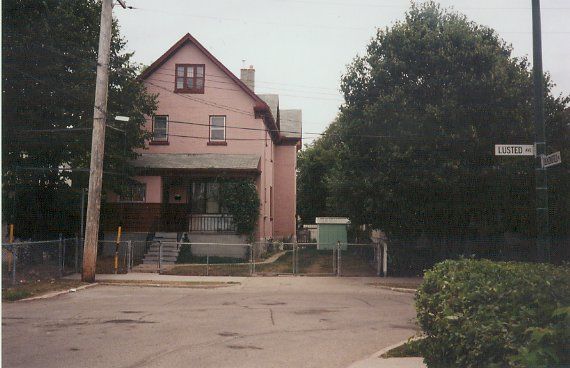 The Gauer Family house on Lusted in 1998

The river is to the left of the above photo and Lusted street no longer extends to the Red river. In an interview with my great aunt Elsie she remembered the Pritchard docks which extended all the way to the foot of Lusted. Docks had to be built along the river bank because ice flows sweeping down the river in the spring destroyed docks that stuck out into the river. In the early 1900s paddle wheel steam boats landed at the Prichard docks a few yards from their home. They carried people down river to Assiniboine Park and Zoo for the day. She told me that, as a child, she enjoyed watching the parade of Winnipegers in their Sunday best walking past their house on the way from Main St. to the dock. I found my family in the 1891 Canadian census as "Rudolph Gower" and family and in the 1901, 1906, 1911 and 1916 census records. Rudolph's first child born in Canada was Rudolph Gauer Jr in 1893 but sadly he died in 1914.

Despite this tragedy the family flourished in Canada and Rudolph and Anna had a total of 9 children. My grandfather, Jacob GAUER, married Amelia DREGER in Winnipeg in 1910 and my father, Gordon Robert Edward Gauer, the fourth of six children, was born in 1920. I was born a third generation Canadian in Winnipeg, Manitoba in 1949 to Gordon R.E. GAUER & Marjorie BELL.


In 2005 I got a copy of a letter sent in 1921 to Rudolph in the town of Langenburg in Saskatchewan from a Martin Gauer in Galicia. It contained a desperate plea for assistance but, sadly, this letter arrived seven years after Rudolph had passed away. Why this was sent to Langenburg is a bit of a mystery other than the fact that a Caspar Rathgeber settled there and he was a family friend as well as a neighbour from Birsula (the Gauers & Rathgebers disembarked the Augusta Victoria together).

Here is the details of my GAUER family tree as I currently understand it.